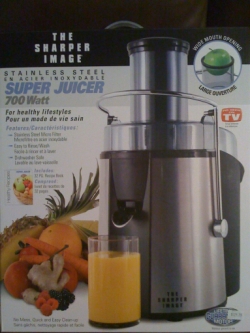 At the 2010 Annual General Meeting it was proposed and voted that our organization will take care for few months of Marian B., until his health gets better.

Marian is a permanent resident of Canada since 2008 and he lives in Burnaby, BC. Marian has health problems (the diagnostic is still under review, he seems to be suspect of cancer). He had no work for few weeks, then he started to work again. One of our Intercer Canada’s member was able to take Marian with him for some jobs.

Our group helped Marian with a new super juicer (to make fruits and vegetable juices). The juicer was on sale from $129.99 before taxes, with $30 discount and was bought with $111.99.

Also one family goes every week to visit Marian and bring him fresh fruits and vegetables, and a cooked meal.

Daniel Anton (one of our Social Directors) coordinates this activity and directs the family that goes every week to visit Marian.

So far, Marian is undergoing more medical tests during March and April and he waits for the doctor’s decision related to his treatment.

Marian feels better since he uses more natural products in his diet. Also he appreciates our group friendship and support during this hard time for him.